Material Misrepresentation in the Context of Life Insurance

What Does Material Misrepresentation Mean in the Context of Life Insurance? 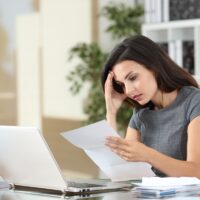 Insurance policies often state that a policyholder or applicant’s material misrepresentation is grounds for denying coverage. In the insurance context, material misrepresentation typically refers to a statement or representation made by the policyholder meant to garner insurance benefits to which they might not otherwise be entitled. The misstatement might occur during the application process, such as if a person applies for health or life insurance and intentionally omits their family history of terminal cancer, or if a person claims that they are a non-smoker when they actually smoke a pack of cigarettes a day. The misstatement might also occur during the claims process, such as if a person claims to have a disability when they do not truly suffer from the claimed injury or illness. Sometimes it’s both: A person might get into a car accident and buy an auto insurance policy after the fact, and then claim the accident occurred after the policy coverage had begun.

Making a material misrepresentation in an insurance setting is not only grounds to deny a claim; it might be criminal insurance fraud. For example, if a homeowner burns down their own home in order to collect the property insurance and then claims that the fire was an accident, they would be committing insurance fraud. The auto driver described above who buys a policy after the fact and then lies about the date of an accident might also be committing criminal fraud.

Rescission of a life insurance policy is permissible when there is a material misrepresentation in the initial application. The insurance company essentially claims that they were misled into selling the policy based on the misrepresentations, and thus the policy was never actually validly agreed upon. Rescission can happen even after a coverage-triggering event (i.e., after the policyholder passes away). Upon rescission, the life insurance company will refund the policy premiums to put the parties back into the position they would have been in had the policy never been entered.

In California, life insurance policies can only be rescinded during a set period, known as the “contestability” period. The contestability period is two years from the date the policy coverage commences. If a policyholder passes away within those two years, the insurer can review the application for misstatements, omissions, or falsehoods, and rescind the policy on that ground. (Technically, they could rescind the policy even before the policyholder passes away, but insurers rarely review policies until they are trying to avoid paying out benefits.)

As explained above, the misstatement must be “material” to serve as grounds for rescission. If an applicant mistypes their home address, for example, that would technically be a “misstatement” but it would not be material. If the applicant claimed they had no medical conditions but actually had a diagnosed terminal liver disease, that would be grounds for rescission.

Trusted Advice and Representation for Insurance Claim Assistance and Denial Appeals
If your insurance claim has been unreasonably denied, or if you are dealing with other bad faith insurance issues in California, fight for the coverage you are owed with the help of the seasoned and effective Los Angeles insurance claim denial lawyers at Gianelli & Morris. Call for a free consultation at 213-489-1600.

By Gianelli & Morris | Posted on August 31, 2021
Free Consultation
We can Help,
Contact Us Today!