MONDAY, FEBRUARY 22, 2021
By Shane Nelson
Special to the Daily Journal 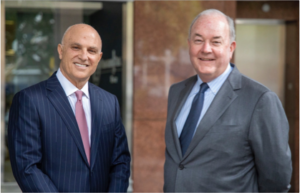 “Rob says, with a great amount of authority, that he sacked me,” Morris explained. “I have no recollection of that. But he claims he’s got film to prove it.”

The two officially met years later as law clerks, working together for Thomas V. Girardi’s firm in the 1970s while Gianelli was a student at Southwestern Law School and Morris was attending Loyola Law School. Each worked elsewhere after completing their law degrees and passing the bar, but they decided over a lunch in the early 1980s to throw in together and launch Gianelli & Morris ALC.

“We both liked working on insurance cases, which we’d done as law clerks,” Gianelli re-called. “But we did what we had to do to keep the doors open in the early days. I think Tim was even doing some criminal stuff, and I did some personal injury. Then as our practice moved forward and grew, we started attracting more insurance cases.”

“We realized that, ‘Hey, we can take cases, where there are small amounts at issue — either by an overcharged premium or a claim or whatever — and use the class action vehicle to advance those,’” Morris explained. “Now, I would say half of our caseload is insurance class actions.”

The firm also had a great deal of success in the 1990s and early 2000s, according to Gianelli, with class actions involving older adults whose insurance companies locked them into extremely illiquid deferred annuities.

“These people would find out two years later, maybe when someone needed to go into the hospital, that they couldn’t take the money out without losing large amounts of their savings,” Gianelli said of the seniors who made up the class. “We pioneered these cases in California and ended up being very successful. We recovered around $400 million in five different cases over a period of about six or eight years.”

Gianelli and Morris both said they find a great deal of fulfillment in helping clients receive substantial settlements in insurance bad faith cases, but Gianelli said the nondisclosure agreement that typically accompanies those resolutions “doesn’t change the practice of the insurance company, and they go off and do it to the next person.”

On the other hand, the public nature of any settlement agreement in class actions makes them “fantastic vehicles for causing these insurance companies or other corporations to change the way they do business,” according to Gianelli.

“I think it’s good for the insurance company,” said Morris, who described the systemic change he’s been a part of through class actions as especially rewarding. “Because when they’re doing something wrong, and they don’t know they’re doing it wrong, it provides a vehicle for them to make the change and pay the people damaged in some manner from that wrongful practice, and to clean it up and do it right in the future. Everybody wins at that stage. Class actions do provide that ability to create change within the industry.”

Defense attorney Kenneth N. Smersfelt, who has opposed Gianelli & Morris a number of times over the past 20 years, said he doesn’t consider the five-attorney shop a small firm.

“They are a very worthy adversary,” Smersfelt said. “They are well resourced and well respected throughout the bar.”

“Rob has the self-confidence and experience to think of creative approaches to solving pretty thorny problems,” Smersfelt said. “We’ve had some big matters that are class actions, and it takes creativity and some trust and faith by both sides to explore whether you can find resolution.”

“He often files what I regard as bogus lawsuits against my clients, but I think as a lawyer, he is professional and very skilled,” Maddigan said. “Rob’s very strategic in what he does, and he doesn’t waste time on a lot of needless disputes or in creating sideshows. … He’s a tough opponent because he’s really good at what he does.”

“But he’s also very good at what he does. They approach their cases as a firm in the right way. I don’t endorse their cases, but they are good lawyers, and that’s why they’ve been successful.”

Gianelli also noted that over the course of their four decades working together, he and his longtime legal partner have — perhaps not surprisingly — come to know each other exceedingly well.

“It’s one of those things where we finish each other’s sentences because we know the way we are thinking about things,” Gi-anelli said of Morris. “And we’ve never had a disagreement over anything of consequence in all the time we’ve been together.”

“We can pretty much read each other’s mind,” he said with a laugh. “So there aren’t a whole lot of surprises.”

Reprinted with permission from the Daily Journal. ©2021 Daily Journal Corporation. All rights reserved. Reprinted by ReprintPros 949-702-5390.

By Gianelli & Morris | Posted on February 22, 2021
Free Consultation
We can Help,
Contact Us Today!