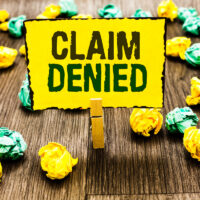 The California Department of Managed Health Care (DMHC) conducts routine surveys of every California health care service plan at least once every three years, examining such factors as how each plan addresses customer grievances, how it makes health care services available, and the access to and payment for emergency services that it provides to members. Over the summer, the DMHC published a report describing what it found through this survey of Anthem Blue Cross, cataloging the various ways in which the insurer failed to uphold its responsibilities to its policyholders. The report laid out 14 deficiencies uncovered by the DMHC. Among those 14 shortcomings, two focused on the insurer’s unwillingness to cover the costs of emergency room care for its enrollees.

One deficiency uncovered by the DMHC was Anthem’s denial of claims for emergency services and care based on an unlawful standard, with decisions made by persons other than clinicians. Learn more below about Anthem’s denials of claims for ER treatment, and contact a seasoned California bad faith insurance attorney for more information.

In its report, the DMHC described the official policy published by Anthem Blue Cross for reviewing claims for ER treatment. The policy states that Anthem provides coverage for members for emergency service visits “if presenting symptoms seem emergent to a prudent layperson. Emergency services are covered to screen and stabilize the member without prior approval where a prudent layperson, acting reasonably, would have believed that an emergency medical condition existed.” In other words, if a prudent person would have thought that the injury warranted the sick or injured person go to the ER, then Anthem would cover the claim.

According to California law, however, this isn’t the standard that insurers are permitted to use when making coverage decisions about ER visits. The California Health and Safety Code states that claims for emergency room care can be denied only when the policyholder “did not require emergency services care and the enrollee reasonably should have known that an emergency did not exist.” To put it another way, health insurers should ask whether the claimant personally had a reasonable belief that they needed to go to the ER, and not whether some other person would have concluded differently. There is a subtle but important difference that gives more weight to the perspective and decision-making abilities of the ill or injured person.

The report also described Anthem’s process for making individual coverage determinations after a policyholder submitted a claim for emergency room care, and the DMHC’s findings were extremely troubling. Among the 54 denied claims reviewed by the DMHC, all of which were issued due to lack of medical necessity, none of these determinations were made by licensed health care professionals. In other words, people other than licensed doctors or nurses were the ones to decide that a visit to the ER lacked medical necessity. Not only was there no licensed health care professional involved in the decision, but the claims were denied automatically by a system designed to deny certain ER diagnosis codes for lack of medical necessity. The adjusters reviewed no medical records, nor did they speak to the claimants’ doctors to confirm details of or circumstances surrounding the claims. They were simply denied out of hand. This practice is, once again, in opposition to California law, not to mention immoral and unjust.

If you’ve been the victim of an insurance denial of claims you believe should be covered under your California health insurance plan, contact the aggressive and dedicated Los Angeles insurance bad faith lawyers at Gianelli & Morris for a free consultation at 213-489-1600.

By Gianelli & Morris | Posted on October 31, 2019
Free Consultation
We can Help,
Contact Us Today!